This project encompassed a combined heat and power unit (CHP or Cogeneration system) which operates in parallel to PG&E reducing peak time utility based line loads primarily during the day. The system was selected to maximize operational time of the engine. The engine is fueled by natural gas and is purchased at negotiated market prices.

The CHP project installed one modular container with a GE Jenbacher JMC engine and generator combined heat and power unit. There are two support skids and one cooling tower that support the system. The CHP system is different from a typical generator system based on the high efficiencies through heat extraction. The CHP system uses a closed-loop heat extraction to capture all waste energy that can be used to operate hot water, steam, or cooling capabilities. 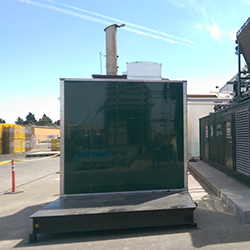 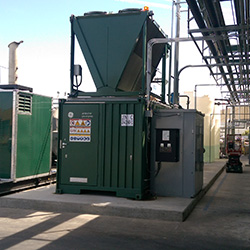